Zombies are the main antagonists of the World War Z franchise. They are the reanimated corpses of dead humans and are extremely violent beings that attack anything living to eat, kill, and infect.

The zombies in Max Brooks' book "The Zombie Survival Guide" and the follow-up novel "World War Z" are people who have been infected with the Solanum virus. They are slow-moving creatures that seem to possess a mysterious sixth sense and stop at nothing to spread the disease via biting and/or scratching living humans. The zombies from the books adhere to the traditional "slow" zombies.

While slow, they are extremely dangerous in large groups and can easily overwhelm survivors or corner them. Damage to the body will do very little to slow them down and damage to the brain is typically the surefire method of killing them.

In startling contrast to the novel, the zombies in the film adaptation of World War Z are depicted as the "fast" type of zombies, capable of running towards their would-be victims with ferocity. The zombies appear to have behavior heavily based on that of animals, hence the opening credits of the film which shows various animal species and their habits. For example, they are able to climb atop of one another to form a "pillar" or "wall" of zombies, allowing them to cross high walls, a characteristic taken from ants. Some zombies can lunge at humans, similar to tigers or lions. The zombies also behave like viruses themselves, as their only interest is in spreading the infection and seem to have no real interest in consuming their prey; once they manage to land a bite on a victim, they quickly lose interest in that victim and cease their attack to immediately chase after another uninfected person. While capable of grabbing their victims, they are more dependent on their jaws, snapping away once a target has been sighted.

When a human is infected, it is a matter of seconds before they turn. The pathogen responsible for zombification is one of the fastest recorded infections observed with people transforming in as little as 12 seconds. During that very short amount of time, the person writhes and convulses violently on the ground, contorting and snapping their body in many directions in an uncomfortable manner before finally standing up. Humans who have recently turned do not look too different from while they were alive. However, their eyes become blurry and black veins appear all over their face and body. After some time, they degrade and appear more like typical zombies with decaying flesh and hair loss, though they are still able to move quite fast.

The zombies are driven to infect any human they see on sight and are attracted to any loud or man-made noises; such as a car engine or a person's voice. When not attacking they enter a dormant state; listlessly standing around awaiting stimulus. The zombies secrete a black tar-like substance from their mouths. The ooze is surmised to be loaded with the virus though it has an incredibly short life span and must be directly injected into the victim through a bite. Having the substance splashed into the mouth does not result in infection.

Curiously, the zombies only go after those who are healthy. Those who have been seriously injured or stricken with severe illness are ignored by the infected. For example, Ellis, a soldier at Camp Humphreys, was ignored in a room full of infected due to his lame leg and was able to escape the room and incinerate the infected. Amputation has been seen as being able to stop the infection as demonstrated by a female IDF soldier. However, given the pathogen's extremely fast-acting nature, it is unlikely that by removing an infected limb (assuming that is where a person was bitten) they cut off the path that allows it to spread throughout the rest of the body. Instead, the host is rendered unsuitable to the virus as a result of the trauma caused by the amputation. Vast herds will actually avoid a seriously ill individual when hunting targets; running around the individual in their path. As a result of this particular quirk, the WHO was able to concoct a vaccine that renders individuals effectively undetectable by the zombies, by tricking them into thinking the person has been infected by a serious disease.

As the video game adaptation of World War Z is primarily based on the film, the zombies are also depicted as the running types with similar physical features such as the black veins and cloudy eyes. They also retain the same behaviors such as increased aggression, attraction to loud noise, and the ability to climb over themselves to reach higher areas quicker. Newly-infected humans still turn in a brisk 12 seconds or less while uncontrollably convulsing all the way through. The zombies seem to be slighter more intelligent than they let on, given that some are capable of jumping out of the way when running towards a survivor and seeing them aim down their weapon's sight on them. This displays hints of self-preservation, suggesting they are not entirely mindless and unthinking creatures.

Gameplay has shown that zombies can be killed with enough damage to their bodies, not just their brains. Although a bullet straight to the head is one of the quickest and most effective ways of killing them, many traditionally ineffective methods of harming zombies such as electrocution, gas, and shots to any other part of the body besides the head have proven to work well enough to put them down for good with enough effort. They have also been shown to occasionally react to pain such as clutching down over their legs when shot in the knee or lashing all around themselves when they are about to die from fire.

There are a few types of regular zombies in the game:

Special zombies, and other threats, exist, serving as a more dangerous threat to the survivors than the average zeke. Special zombies stand out with a more unique outfit and appearance. Some may possess objects or abilities that make them a bit different to fight against in contrast to all the regular zombies that are fought. Some possess fairly notable behavioral quirks that make them stand out when compared to normal zekes for the most part. Most special zombies seem to display greater cognitive abilities and more intelligence than regular zekes. This may have to do with the type of person they used to be and/or circumstances brought on them before their death and subsequent infection.

There are several types of special zombies in the game: 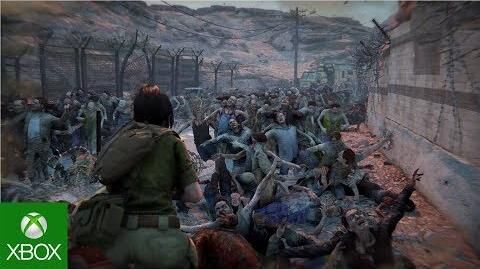