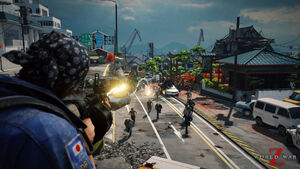 Tokyo is the capital of Japan, housing the Japanese seat of government, the National Diet, and the Emperor of Japan. Previously known as Edo, it has been the capital of Japan ever since Emperor Meiji moved his seat from Kyoto in 1868, renaming Edo to Tokyo in the process.

During the outbreak in Japan, the Japanese government felt that they lacked the means to fight off the zombie horde, and instead enacted the mass exodus of the Japanese home islands to secure locations. This was fueled by the lack of combat experience of the JSDF, and the fact that only certain people can own firearms in Japan (usually Military soldiers and Police officers) serves as additional reasons why Japan couldn't defend itself.

The government eventually decided to evacuate to Russia's Kamchatka Peninsula.

Team 4, consisting of Sho Sugiyama, Kimiko Nomura, Tatsuo Matsumoto and Hiroji Okada are sweeping up their search and rescue effort alongside their rescue leader, who has already brought stranded civilians onto her bus. Sho tries to call out for more survivors, but the streets are already filled with zeke and houses empty, so she concludes the operation.

While the team makes their way to the rescue leader, they hear shots on the highway. The leader informs them that they had enemy contact, but states that the sounds would bring in more zeke. The team catches up with the bus at the tunnel and protect it from the zeke lurking inside. They eventually come to a roadblock and use a control panel to lower it. While the barrier is lowering, it unfortunately alerts a swarm in the process as a civilian had rammed their car into it in a desperate bid to escape. The team is able to fight off the swarm, upon which they comment that evacuation was the right choice. They soon get into contact with command.

The rescue leader informs them that she has a bus with 34 civilians, but the commander cannot accept them as the perimeter is failing and that the zeke have a straight shot to the port if it fails. The team volunteers to cover the gates, prompting the commander to accept the remaining civilians, but warns that he'll have to leave if the gates are breached.

Fighting their way to Gates 1 & 2, Kimiko asks Hiroji to compare the situation to Los Angles. Hiroji informs her that that the situation was even worse there. They eventually arrive at the gates and assist the JSDF in setting up defenses as a massive swarm bears upon both gates. Due to their help, the JSDF are able to hold both gates, and the bus is let through.

As command begins their final preparations to evacuate, Team 4 fights their way to the ship, killing any zeke pursuing them in the process. They arrive at Checkpoint 12, but the JSDF inform them that a swarm is coming. The team is able to hold off the swarm, and after the soldiers confirm that they're healthy, let them in. Command then informs the team to head to the fuel depot, much to their disdain. Upon arriving, the commander informs them that he intends to blow the fuel depot up to create a wall of fire to discourage the zeke from chasing after them. The team are ambushed by the zeke while setting the explosives, but are able to plant them regardless.

They soon arrive at a final checkpoint near the ship, where they are met by more JSDF personnel. They inform them that a massive swarm is coming down on the ship now that the perimeter has failed. The team is worried the commander is abandoning them, but he states that he has a tether boat nearby to allow them to board the ship. Team 4 and the JSDF are able to fend off the massive swarm and use the boat to escape, watching as the commander has the fuel depot blown up. They comment that their war is not over and eventually board the ship.

As the ship makes its way to Kamchatka, Team 4 is on standby when the commander informs all passengers to lock themselves in their cabins and all JSDF soldiers to make their way to cargo bay 1. The four realize that the zeke have gotten on board and repeats the commander's orders to confused civilians. They soon encounter the zeke and clear the deck of zeke, allowing the JSDF to regain control of the area.

They then make contact with the rescue leader, who informs them that the zeke are coming from the cargo bays and that they need to be sealed off. Upon arrival, they make their way through a clean cargo bay and enter the next one, swarming with zeke. Fortunately, the four are able to cut off the flow of zeke by shutting off the gates. The rescue leader then informs them that the JSDF are preparing a kill-zone as they have no other choice. The four survivors doubt the effectivity of the kill-zone, seeing that they will not have enough ammo and that the worlds' armies have failed to contain the zeke, but go through with it regardless to protect the civilians.

After clearing the cargo bays and engineering room, they make their way to the atrium, overrun with zeke. They fight their way through and eventually arrive at the forward stern, greeted by JSDF personnel, who advise they prepare defenses. After setting up the defenses, the survivors activate a loudspeaker to draw in any remaining zeke not being funneled by the JSDF, which bear down on their position. The commander is able to get an attack helicopter from the Izumo to assist, and the swarm is eventually destroyed. He then orders the JSDF to perform a final sweep of the ship to ensure all zeke were eliminated. Kimiko worries about her grandparents, but Sho reassures her and Tatsuo states that they'll need people like her when they reclaim Japan from the zeke.