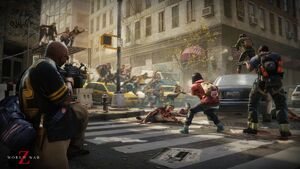 New York is a city visited in World War Z. It is the most populous city in the United States of America, and also their most densely populated city. Home to the United Nations Headquarters, New York is also an important center for international diplomacy.

Yonkers is a city located in Westchester County, New York. The city was chosen as the location by the U.S. military's forces as the battlefield to engage the bulk of the infestation of New York. By this point, there were already millions of zombies in New York. The military hoped that the battle would be a morale boost to the Americans that the government was still in control of the entire situation. They showed off many technological marvels of Pre-War America, including the Land Warrior program, various combat vehicles (including Humvees, Bradleys, and Abrams), electronic warfare equipment and vehicles, and deployable toilet system (Family of Latrines, FOL for short).

The location of the battle was situated near the Hudson river. The soldiers worn MOPP (Mission Oriented Protective Posture) 4 Gear, meant to protect against biochemical and radioactive environment, and they were in trenches. Parking lots were blown off to clear for tank placements. FOL were deployed, despite that water pressure during the time inside many houses and buildings in the area were still available. And according to some unconfirmed records, for every two or three soldiers, there was one reporter stationed with them.

The battle started with the zombies slowly entering the first killzone. As they slowly build up into a stream of undead, the MLRS (Multiple Launch Rocket System) were activated and launched canisters of bomblets (small anti-personnel grenades) with limited armor-piercing capabilities. Despite taking out three quarters of the initial horde, the zombies kept coming, as each dead were replaced by a new one, and they somewhat shielded each other from the nicknamed "steel rain" of the MLRS, thus the damage eventually lessened. After that, they entered the second killzone, as the US Army's Paladins fired their High-explosive rounds, which caused lesser damage than the rockets, due to the fact that the intended effect of a HE round, the Sudden Nerve Trauma (SNT), didn't happen since the zombies were already dead. After going through the second killzone, the next killzone was direct fire from the soldiers, the tanks and the attack helicopters above them. While they managed to grind the zombies with their fire, it wasn't enough, since they lack the ammunition to continue the grind. Because of this, the zombies would slowly reach their defensive line. Even when the Joint-Strike Fighters (JSF) were deployed with heavy ordinance of Joint-Strike Ordinance Weapons (JSOW), they were ineffective in stemming the tide of the zombie horde, until they finally overwhelmed the soldiers, and chaos ensued.

The battle was a massive failure for the modern American military. Not only they lacked the necessary equipment to sustain the operation, they also failed to comprehend what kind of battle they were facing. The sheer unnecessary equipment that were brought into the area, such as radar and electronic warfare equipment, simply showed that the severe underestimation of the enemy they were facing. Instead of restoring the confidence of Americans to their government, it backfired and stated something that was the reverse of what they intended.

Groups of survivors have survived the city's downfall during the outbreak, with the military unable to stop the zeke from advancing.

Four survivors, Angel Flores, Tashaun Burnell, Bunko Tatsumi and Arnetta Larkin are at their hideout at the top of a building. Running low on supplies and desperate to survive, they make the ultimate decision to leave. As they do so, another survivor in contact with them, Dan, doesn't see them anymore and asks where they have gone on the radio. They tell Dan that their supplies are running low and they're taking the chance to connect with the military's evacuation post at Inwood, both parties wishing each other to better times.

As the four descend down to the mall area of the building they're on, a US Army helicopter flies by with a massive swarm pursuing it. With large numbers of zeke in the atrium, the survivors get the drop on them by shooting glass ornaments, alerting the zekes to the survivors' presence. But they are able to clear them and make their way to the bottom, where Dan informs them that a swarm is headed their way down Broadway. They set up defenses and repel the incoming swarm, before making a mad dash to the subway.

Upon arriving at the subway, they hear a train stopping and find Stevie, the mad subway conductor. He tells them that he will give them a ride to Inwood if they find supplies for him in the area. The four find him to be completely insane, but seeing that he is their only option to evacuation, they accept his request. After procuring seven crates of supplies, Stevie drives off with the survivors in tow.

The trip does not last long however, as they soon come upon a blocked access point to the terminal hub. Stevie tries to call for his contact, Roy, but Roy does not respond, having been killed by the zeke roaming the area. Stevie then sends the survivors to open the path for him, much to their disdain.

Upon arriving at the terminal hub, Stevie claims that the train is having malfunctions so they'll have to fight off the incoming swarm without his help. They set up defenses and repel the first swarm just as he drives in. He tells them to open the other access point so they can continue on their journey, utilizing a vent on the far side of the hub.

As they make their way through, the four soon stumble into a gas-filled area. They utilize the control panel to activate the first system. When they activate the second one, it's missing a key, so they begin searching the dead workers littering the area for one. Upon finding the third panel, they are forced to enter the gas-filled area but are able to procure a final key, arriving into a spiral center. A swarm drops down on them from above, but the four are able to escape mostly unscathed and arrive at the other side of the terminal. Another swarm descends on the group and tries to attack the train, but is repulsed.

Stevie then messes around with the four and tries to abandon them, only for Arnetta to order the group to open fire if he tries to. Stevie is dismayed they didn't appreciate his "joke", stops and orders them to get on.

Stevie drives the group to Inwood before continuing on as if nothing is going on. The survivors fight their way through a train maintenance hub, utilizing one of the trains to ram a blocked shutter as a swarm descends on them due to the noise it creates. Fortunately, they are able to shake the swarm off and arrive in a museum, stealthily making their way across an open area with zeke crawling below them, unaware of their presence.

Upon getting out of the museum, the four watch as another swarm descends on the military, but appears to be repulsed by mortar fire. They make their way across a walkway and find that the military has left auto-turrets in the area, either capturing or disabling them in the process. By the time they arrive at the evacuation site, it has been overrun, much to their horror. Fortunately, they find a boat tethered not too far away, but another swarm descends down on them. Despite a malfunctioning crank, they are able to pull the boat in and escape.

Dead in the Water

Eventually, their boat runs out of fuel and the survivors are forced off around Yonkers, where they spot several helicopters. They decide to take the chance to see if they can be evacuated. Seeing that they are armed and willing to help, the military asks them to come to the hospital, but neglect to mention they left defenses in the parking garage, much to their annoyance.

Upon arriving at the hospital, the local captain informs them that several swarms are bearing down on their position and they need to evacuate the wounded. He orders them to set up defenses while he contacts Sgt. Pembry, but Pembry does not respond. One of the survivors grabs the flare gun, allowing a helicopter designated Elvis 12 to fire on incoming swarms when available. The survivors hold out long enough that the last of the wounded are evacuated. The captain then yells for his men and the survivors to get onboard the last helicopter, grateful for their assistance. The survivors are glad to finally rest, stating that the zeke can have New York. As they ask the captain where they are going, he tells them that the only thing they can do now is run as the zeke were barely affected by the military's tactics.