View source
This article is a stub. You can help World War Z Wiki by expanding it. 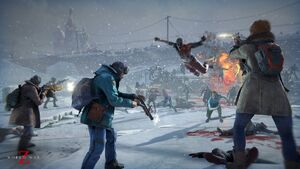 Moscow is a city visited in World War Z. The capital of the Russian Federation, the city fared little better than any other cities during the global outbreak.

After the zeke overran the city, there were scattered groups of survivors all throughout Moscow, working together and struggling to survive as they scavenged for supplies.

Four survivors, Oksana Orlovskaya, Ivan Dovchenko, Timur Yushkevich and Sergei Popov, who were on a supply run, soon caught some military transmissions, the military struggling to hold the zekes off. They fought their way through the museum in an attempt to reach the military, activating kill-alarms that drew most of the zeke away from the military. Despite this, they were unable to arrive in time and found all but one dead; Doctor Svetlana, and a cache of food supplies. Svetlana explained to the four that she and her soldiers received a distress signal from Red Square an hour ago and made their way to rescue them, only to crash.

The four set up defenses and were able to repel the incoming swarm, with their fellow survivors coming after the swarm had been cleared. They tasked them with moving the supplies to the church and tried to take Svetlana with them, but she persisted on finding the team. Sergei decided to help her, seeing that there was a chance they could still be alive.

Key to the City

The survivors arrive at the state mall. The team quickly divided themselves into two groups; Sergei and Bumazhkov, the latter staying behind to cover Svetlana while the former cleared the area to the distress signal. After clearing the garage of initial zeke, Bumazkhov's team arrived. Svetlana informed them that she was looking for a key with metal indentations, explaining that the government had a supply of nerve agent underneath the Kremlin that was to be used if the city was occupied by foreign forces. After fending off another wave of zeke, Svetlana could not find the key, so the team decided to search the mall above them. They were successful in doing so.

The survivors realized that they could save their city, seeing that they were struggling to live with the zeke around. They were able to send a transmission informing other survivors in the city to evacuate in preparation for the nerve gas strike.

Svetlana led Sergei's team to the bunker while the remaining survivors began to evacuate. The four were surprised to learn of such a massive underground system underneath their noses, eventually arriving at the bunker. Svetlana overrode the system to open the doors from the outside, and upon entering, Svetlana immediately set herself in place to guide the survivors around. There were no survivors in the bunker, as all personnel inside knew what they were getting into, but left behind some automated turrets.

The four eventually arrived at the production facility, where they witnessed a demonstration of the nerve agent killing off the zeke. Svetlana then guided them into the mixing chamber and told them how to prepare the nerve agent. They were able to create it while fighting off a swarm at the same time, and a bursting agent was launched into the surface. Svetlana told them that they would be able to reclaim Moscow in six months.

For reasons unknown, the four were somehow separated from Svetlana and abandoned for five days. Believing that she had abandoned them, the four decide to set out to the surface, knowing that they would die if they remained inside. They were able to pick up her transmission upon reaching the tunnels, where Svetlana explained that she had tried to rescue them, but were overcome by numerous zeke. She requested that they flood the tunnels with gas, as there were too many zeke inside them, much to the group's surprise.

Regardless, the group eventually flooded the tunnels with the nerve agent, and eventually met up with Svetlana and her team. They fought off a massive swarm just as the helicopter arrived to extract them. Sergei stated that he was surprised to have survived the city's fall, but it wouldn't be what it was like before when they returned. 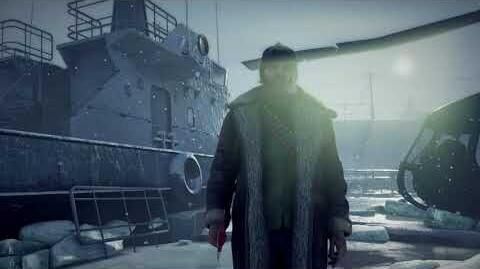