✓
The Machine Pistol, also known as the Geist 17MP, is a Tier I secondary weapon in World War Z.

For classes in Co-op Campaign, the Dronemaster class can start with one, but only if a specific perk is activated. For classes in Multiplayer, it is the default starting primary weapon of the Warfighter and Assassin.

The Machine Pistol is three-round-burst weapon. When shooting the weapon, three shots are fired with each pull of the trigger. This gives the weapon a higher damage output than the Pistol. However, it lacks the suppressor that the Pistol starts with by default, meaning stealth will not be an option with your secondary should you find this weapon early on.

The suppressor upgrade to make the gun silent is unlocked at level 4 only for the main branch of upgrades.

The Machine Pistol is the only burst-fire weapon in Tier I.

The Challenge Coins Pistol's unique perk is called Refreshing Kills. By killing a special zombie, you can instantly reload your primary weapon back to full when you switch back to it, assuming the magazine is not currently full when you switched to the Machine Pistol. While a bit situational, it can be helpful if you find yourself constantly unloading your primary and switching to your secondary. Killing a special zombie like a Lurker or Gasbag are typically the best enemies to use this weapon for its benefit due to their weaker health compared to other special zombies. With controlled bursts, Screamers are also acceptable targets even if they are far away to shoot. Bombers are typically in the same spot as Lurkers and Gasbags since they too can be easily killed if shot in the chest, but you must weigh the options between instantly reloading your primary or carefully taking down the Bomber and earn his loot. The Bull and the Infector are tougher targets to take down with a secondary alone. However, unloading a magazine or two at their heads or the Bull's vulnerable back can work just as well. If you do not have enough ammo to completely reload the primary weapon's magazine, the remaining ammo will be loaded. If you have completely run out of carried ammo or the primary weapon is completely empty, nothing will happen.

*On the main branch of upgrades, the third version of the Machine Pistol is exactly identical to the second version.

The Machine Pistol on the main branch of upgrades are based on the Glock 17. The weapon's actual name, the Geist 17MP, references that specific model. Despite being based on a Glock 17, a semi-automatic pistol, it is a burst-fire weapon by default hence the MP (Machine Pistol) acronym in the name. The Machine Pistol has a tan body, a black MOS (Modular Optic System) slide, and a threaded barrel.

The Scout Rifle on the alternate branch of upgrades are based on the Glock 40 which includes the longer slide. It also feature cutouts on both sides of the slide.

As with all customizable weapons, subsequent versions include a multitude of accessories to visually represent its improved stats. Attachments on the Machine Pistol include extended magazines, flashlight/laser combos, red dot sights, Beavertail grip sleeves, and muzzle brakes.

The Challenge Coins version of the Machine Pistol is based on the second version on the main branch of upgrades. However, it has the suppressor and is fully automatic. Its function as a full-auto weapon is reminiscent of the Glock 18 which had that capability via a selector switch. It is implied that this specific version was converted to be an automatic weapon. 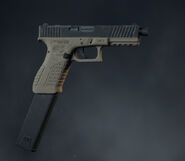 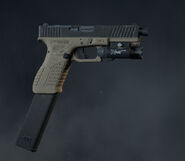 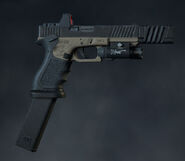 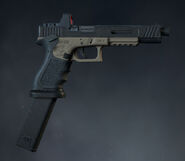 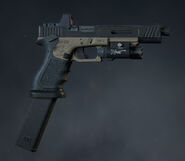