View source
This article is in need of some relevant and appropriate images, videos, and/or gifs. You can help World War Z Wiki by adding some.

The Bomber is a special zombie in World War Z. He became a permanent addition to the undead horde in the Horde Mode Z Update.

The Bomber brings valuable goods and an explosive surprise; the actions that are taken to put him down determine which one is received.

The Bomber is a zeke dressed in a slightly torn black military combat uniform with head covering, a tan tactical vest with several pouches, a tactical SCBA and PAPR system connected to a black breathing mask, combat boots, a black combat glove, a black military tactical belt, and a tan tactical helmet with a set of noise reduction headsets and panoramic night-vision goggles with the battery pack attached to the back by a helmet bridge. A tan drop leg holster carrying a pistol rests on his right thigh while a drop leg pouch rests on the left thigh. A watch rests fastened to the front of the vest's left shoulder strap. A utility pouch attached to the right of his vest has three glowing red lightsticks secured through the MOLLE webbing. Several straps and harnesses are wrapped around his uniform.

Three heavily blood-coated claymores mines are strapped diagonally across the front of the Bomber's vest, each fastened by a pair of side release buckles.

The Bomber's black combat uniform has large tears across the right upper arm sleeve and the left forearm. His right glove is torn as well and he is missing his left glove entirely. The SCBA cylinder monitor that rests on the front has a small section of one of its cable coverings cut, exposing the wires underneath.

The night vision goggles the Bomber wears are still functional, which causes the peculiar green glow on the lenses of his breathing mask.

The Bomber mostly acts and behaves like any other regular zeke. However, on top of the regular growls he makes, he also produces extremely mechanical-sounding groans and constant beeping noises due to his equipment. Other sounds that he makes include blaring sirens, distorted breathing, and lightly-scrambled radio frequency noises.

The Bomber has the ability to cause a large explosion. If the right circumstances are met, his chest bombs will be primed and armed to blow up. A suicidal attack with lethal results when successful, the Bomber should not be toyed with as the explosion he creates is big and deadly.

While the Bomber is a dangerously destructive foe, he can also be helpful towards the survivors by offering loot should they manage to take him out without making him explode violently. With precise shots to areas outside of his chest and torso, the Bomber will be forced onto the ground, leaving him a vulnerable and miserably writhing zeke waiting to be killed off properly. However, should survivors leave him down for long enough, he will eventually explode on his own.

"The Bomber is a walking explosive with a sensitive detonator. If you shoot him anywhere besides his legs or let him come near you, he will explode."

"The Bomber is always carrying something useful. Shoot him in the legs and finish him with a melee strike to keep him from blowing up and save the loot." ― Tutorial Tips

The Bomber is an enemy capable of exploding, delivering huge amounts of damage across multiple survivors. However, he also drops rewards for skillful takedowns.

Most of this section is conjecture, made up largely of observation and interpretations in an attempt to provide a reasonable and possible explanation of the subject in question. Do not consider everything written here to be entirely factual or definitive of the subject matter.

The nickname "Bomber" came from the explosives that are strapped to his chest and his suicidal method of attack. The word Bomber describes a person who operates and sets bombs or any type of explosive weapon.

The Bomber used to be an explosives expert up until his zombification. What that means is that he may have been a part of some sort of armed forces. This is backed up by all of his military-grade equipment and the weapons (both the pistol on his leg and the one he drops as loot) he carries around with him. While he is referred to as an explosives expert, it is used more to describe what the Bomber generally appears to be: a soldier that heavily utilizes explosive weaponry. However, a more appropriate term for explosives expert would be explosive ordnance disposal (EOD) technician. It is possible that the Bomber was still knowledgeable in this field of expertise and at least knew how to handle undetonated explosive tools appropriately.

The Bomber has a set of claymore mines rigged to the front of his chest. There are a couple of oddities to note about these explosives. First, the claymores are a noticeable red color as opposed to the usual green. Close inspection reveals the red to be blood. Be it zeke or human blood, it was likely splattered all over them from a prior incident and was not wiped off. Second, the claymore mines strapped across the Bomber's chest have blinking lights attached to them that can be either red or yellow and produce incredibly audible beeping noises. Given that the Bomber wears his loud and noticeable explosives on his vest, it could suggest that he failed to pull off a last-ditch suicide attack against the zekes when they managed to corner him. The tears on the Bomber's sleeves suggested there may have been a struggle, leading to him getting infected from his arms and was ultimately prevented from detonating his explosives.

As with all special zombies, the Bomber produces unique sounds to differentiate himself from regular zekes. Different from the rest of the special zombies, the Bomber does make the same groaning sounds the regular zekes make. However, this can only be heard by listening very closely to the Bomber while he is alone as these sounds tend to get drowned out by all the other noises he makes. On top of his claymore mines that make beeping noises when activated as mentioned earlier, he can be heard making a variety of loud, garbled mechanical sounds. These noises likely stem from his equipment. Given his appearance, it is possible these noises are being produced from communication systems belonging to the Bomber. Given how warped and staticky these sounds are, as well as the fact that they produce erratic beeping noises, they were likely damaged at some point before or after the Bomber's zombification.

Compared to most special zombies, the Bomber does not display any sort of outstanding traits, lining him up more closely with regular zekes in terms of overall behavior. However, he proves to be slightly more aggressive as he never shows any hints of self-preservation. Regular zekes sometimes react to the survivors pointing their weapons at them and will purposefully dodge out of the way in an attempt to avoid bullets. In contrast, the Bomber will always run headfirst into the survivors, ensuring that if he gets close enough to them or they shoot his body, he will explode and deal heavy damage.

When the Bomber is taken down carefully, he will fall to the ground unable to move. Despite not being able to do anything in this state, he will visibly show resistance until he dies, either from his explosives or a melee attack from the survivors. If it were to be assumed that the pre-infected Bomber really did have the determination to blow himself up to kill as many zekes as he could, then it is possible that the Bomber's resilience may have carried over into his death which may explain why being shot in the limbs do not seem effective in killing him, instead leaving him to writhe on the floor. Unlike regular zekes, he will not move or be able to attack survivors that get close while laying on the floor. However, as a last act of defiance, he will set off his explosives into exploding, albeit with a more lenient amount of time before they do and with the chance of being stopped. Any attempts to kill him while he is on the ground by shooting more bullets into his arms or legs will be futile, and while headshots can also cause him to fall into a disabled state, any further shots to the head will prove equally pointless. Unless he is given a proper send-off with a deadly melee finisher or shot in the chest, he will spend his last moments as a zeke as he tried while he was still human: going out with a bang.

There is one achievement related to the Bomber that can be earned.

Bomber art from the Season 2 Roadmap

Bomber out at night

Bomber in a Tokyo cruise ship 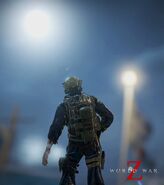 Illuminated Bomber from behind
Community content is available under CC-BY-SA unless otherwise noted.
Advertisement